Where will it go? 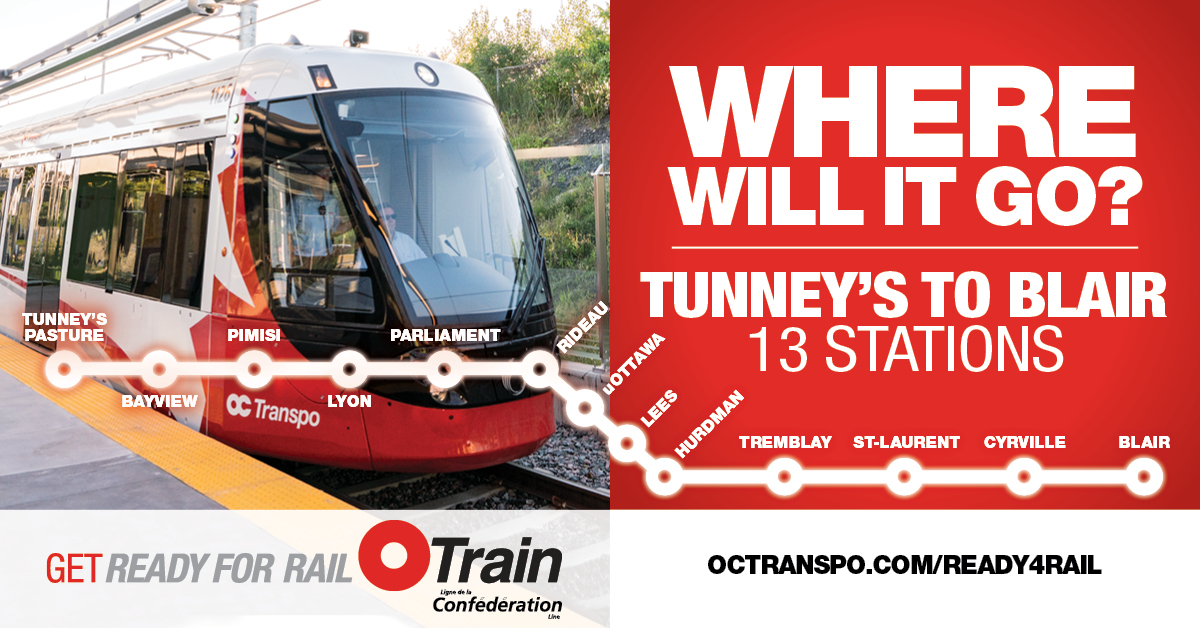 The O-Train Confederation Line is central

The O-Train Confederation Line will connect 13 stations from Tunney’s Pasture in the west to Blair in the east, replacing current Transitway service through central Ottawa.

Most customers will use the Confederation Line on a daily basis in their transit trips, to get to and from downtown.

Through downtown, the Confederation Line travels underground in a 2.5-km tunnel that stretches from LeBreton Flats to Waller Street.

When you arrive at one of the central stations — Lyon, Parliament or Rideau — you will be protected from the elements as you exit the train onto a modern, underground platform. Escalators and elevators provide an easy connection to street level, and local area maps show the location of nearby destinations.

Destinations beyond the Confederation Line

Destinations not located directly along Line 1 are accessible by bus, or by Line 2, the O-Train Trillium Line, which connects at Bayview Station. Confederation Line stations are designed to make it easy to transfer:

Most customers will have a one-bus connection from the Confederation Line to other destinations that are not located downtown. These will be served by Rapid, Frequent and Local bus routes that connect directly to a new Confederation Line station.

Transforming the service
Where will it go? How often will it come? How many will it carry?
Expanding O-Train service New route numbers New service types New service map
Designed with you in mind
Built for accessibility Built for safety
Simplified navigation New trains A healthy choice My station Name the Trains Contest Winners The O-Line
Fares & Tickets
Where will I buy my fare? How will I get through the gate?
Fare prices Fare-paid zone
My trip
How will it change my trip? How will I get to it? How will I transfer?
Connecting bus routes Frequent & reliable service My neighbourhood My route