Streetcar No. 696 gets new lease on life

"Ottawa streetcar No. 696 will celebrate her 100th birthday next year and, truth be told, she’s broken down and showing her age. She was, after all, born in the reign of Robert Borden, during the First World War, and was, quite literally, ridden hard and put away wet."

Streetcar 696 – Getting Help from Local Students 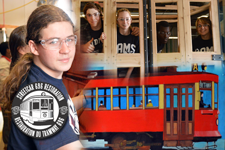 Students from the Rideau High School carpentry and mechanics class with their teachers Robert Aucoin and Mark Backman have been helping with Streetcar 696. Since last September, they’ve been working on sanding and prepping the entrance and exit doors, and making all the cherry wood window frames. Recently, they met with Rheaume Laplante and other volunteers to install the doors and windows and admire the fine results of their hard work. Thanks to Rideau High School and to all the volunteers for all their work with this important project. 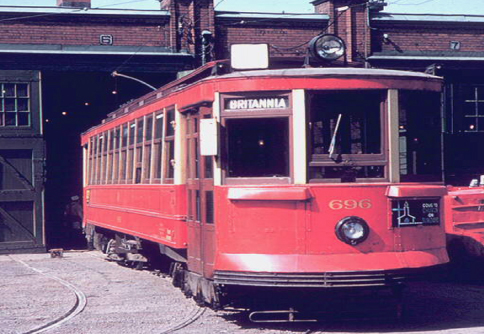 Only a few of the Ottawa Car Company streetcars still exist. Streetcar 696 was acquired in 1959 by the Canadian Railway Museum as part of its collection in Saint Constant, Québec. It was brought back to Ottawa by a group of volunteers determined to restore it to its former glory. Several enthusiastic and dedicated volunteers have been donating their time and expertise. The group includes active and retired OC Transpo employees and rail enthusiasts, who are all eager to see streetcar 696 back on track.

The goal is to restore Streetcar 696 to its running condition for its 100th anniversary in 2017. Once restored, Streetcar 696 will be publicly displayed in Ottawa for the enjoyment of all residents and visitors to our city!

The estimated cost of restoring the streetcar is $300,000. The restoration team is seeking corporate sponsors and donations in the form of materials, services, and financial contributions.

History of the Streetcar

Thomas Ahearn and Warren Soper, two dealers in electrical supplies who had been buying up electrical businesses under the banner of the Ottawa Electric Company, established the Ottawa Electric Railway Company in 1891.  Their company had been providing Ottawa with electric light service since 1890 and was able to increase capacity from its station on Victoria Island (near the Chaudière Falls) to power electric streetcars. 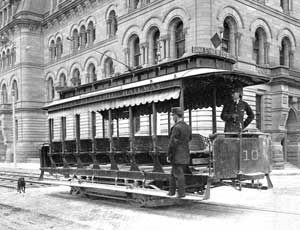 In 1893, Ahearn and Soper bought out W.W. Wylie, an Ottawa carriage and wagon builder. They established a company that operated on the corner of Kent and Slater Street as the Ottawa Car Company, the Ottawa Car Manufacturing Company, and the Ottawa Car and Aircraft Company, until 1947. During that time it built approximately 1700 streetcar and rail vehicles for cities and companies across North America. The company also built horse-drawn carriages and military vehicles during the First World War, and aircraft parts during the Second World War. Following delivery of four new 1000 series streetcars to the OER in 1947 (the last new streetcars purchased), the plant was sold.

By 1895, Ottawa had 48 kilometres of track carrying 68 streetcars. By the end of that year ridership had increased to 4.1 million. The system would eventually expand to cover most of Ottawa's downtown and suburban areas, contributing to their development.

In 1900, OER bought Britannia Park and opened a pavilion where special activities were held. This amusement park served as Ottawa's playground for thousands of residents who came by streetcar for family outings. It was compared to Coney Island and Old Orchard Beach. Streetcar companies at the time saw amusement type facilities as a way to promote the use of their transportation system.

At its peak in 1929, the Ottawa Electric Railway carried more than 30 million riders on 90.5 kilometres of track. The company employed 334 motormen and conductors.

In 1948, the Ottawa Transportation Commission was formed, ending the long association with Ahearn and Soper. The City of Ottawa assumed the OER fleet of 130 streetcars, 61 buses, service vehicles, buildings, power plants, and the Britannia property holdings.

Every Wednesday night, a group of volunteers comes together at its new location at 164 Colonnade Road and work on bringing back a piece of Ottawa's transit history. Since 2000, the team has been dedicated to the restoration of Streetcar 696, the last remaining 600-series streetcar that serviced Ottawa between 1915 and 1959. The goal is to run Streetcar 696 on one of our remaining tracks for residents and tourists visiting our city.

Streetcar 696 was acquired in 1959 by the Canadian Railway Museum (CRM) as part of its collection in Saint Constant, Québec. A group of volunteers brought 696 back to Ottawa in 1989. In 2000, then-general manager Gordon Diamond suggested that the restoration could become a volunteer opportunity for Ottawa area rail enthusiasts. Arrangements were made and through word of mouth, a small group of volunteers came forward to offer their expertise. The Streetcar 696 Restoration Project went into full swing.

The streetcar was in horrible shape. Four decades of exposure to the elements had turned the car interior into a mess of rotting wood and rusted metal. It was questionable if the car could be restored at all, but the team decided to go forward with the project. Original parts were salvaged as much as possible, but it was clear that the team would have to rebuild the majority of the car from scratch.

Restoring the streetcar has proven to be a challenge. Besides the fact that it has to be rebuilt from the ground up, the tools used to construct a vehicle manufactured almost a century ago just aren't available anymore. Also, most of the streetcar blueprints disappeared with the Ottawa Electric Railway Company (OER) when it was sold in 1947.

However, the team has persevered. Thanks to their variety of skills and trade backgrounds the necessary welding, electrical, upholstering, and machine work is covered. For instance, project coordinator and OC Transpo retiree Rhéaume Laplante does the bulk of the bodywork. Georg Rubli, an electrician by trade, is restoring the car's truck system. Mike Mueller does pretty much anything the team requires, including upholstery work and riveting. Regardless of the job, the team has found a way to make it work.

Over the years, the team has reached out for help to other rail experts and companies such as Lucon Metal, Wood Sources, etc... Presently Eric Vardon and Jason Belland at Malmberg are rebuilding the leaf spring for the trucks. Establishing relationships with the Toronto Transit Commission, the CRM, and the Halton County Radial Railway has given volunteers access to tools, spare parts and a wealth of experience in rebuilding antique streetcars.

"We've relied so much on museums, companies, and other rail enthusiasts for advice and donations," said Laplante. "Just today, a gentleman from Winnipeg confirmed that he'd send some parts. These donations make the project possible."

Our volunteers' relationship with the Halton County Radial Railway is especially important to the project. For one weekend every year, the volunteers make a trip to the museum in Guelph, which is home to the biggest collection of working streetcars in Ontario. In exchange for much-needed parts and advice, our team offer their skills and do work that Halton's volunteers wouldn't be able to complete otherwise. Their work one year was rebuilding the suspension on a streetcar. in 2011, they taught Halton's volunteers how to use a spray gun for priming and painting.

The annual trip to Halton isn't all work, though. Everyone's highlight is when the day's work is done and they get the chance to drive the large collection of operational streetcars. Experiencing what it's like to drive a working streetcar keeps the team's dream of a fully-operational Streetcar 696 alive.

One's bound to ask, why continue such a lengthy project; what drives you to continue? The answer is simple, says Bruce Dudley, a former streetcar operator and team member. "We've worked together for years, some of us for more than a decade. It's not only about the streetcar - it's about the friendships we've made in the process. I just hope that I get a chance to drive the thing before I'm too old!"

Our goals are to have the streetcar 696 project complete and ready for service on its 100th anniversary and the 150th anniversary of the City of Ottawa in 2017. The restoration team is seeking corporate sponsors and donations in the form of materials, services, and financial contributions. The restoration project has had several business partners who have helped for years, and whenever possible, the project team members acknowledge their help. Once Streetcar 696 is completed and operating for the public, all long-term sponsors will be recognized with signs and posters at any project event.

The products available for purchase are:

Please view the Streetcar merchandise order form for prices on the items listed above.

How to order Streetcar 696 merchandise:

To order, print and complete the Streetcar Order form above and mail to:

Email Rheaume Laplante with your order information included to: laplanterheaume696@gmail.com.

If you order by email, please include:  Item, Description, Price, Quantity, Total and we will contact you regarding the total cost and payment options.