Reminder: Customers are required to wear a face mask when entering buses, trains, shelters, stations, Para Transpo minibuses and contracted taxis. Use the hand sanitizer dispensers in select stations and always wash your hands thoroughly when you reach your destination. Please do not use transit if you’re sick.

These adjustments reflect seasonal changes in ridership and the changing needs of our customers.

Introduced in early March, morning trips towards Hurdman Station will continue to start at Walkley Station and follow a new routing to Fielding Dr.:

Afternoon trips on Route 290 will continue to end on Fielding Dr. instead of being extended to Walkley Station.

Get your new Route 290 Travel Plan 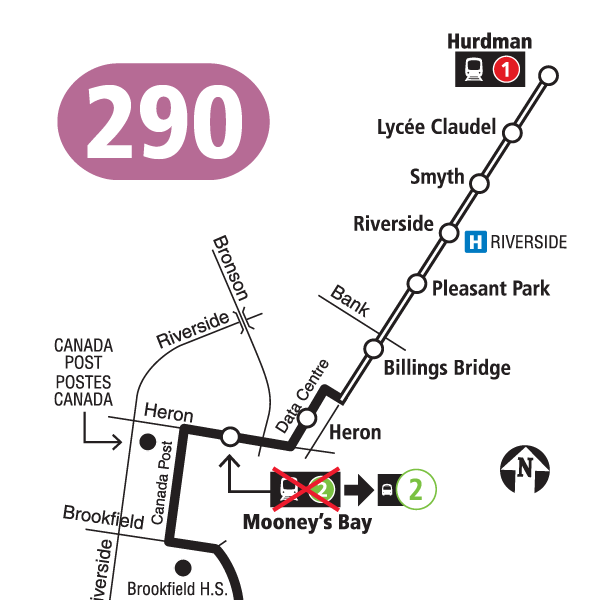 Trips on some routes will be adjusted to match seasonal changes in ridership, and to make schedules more reliable. These adjustments include:

Trips on weekdays are being adjusted on these routes:

Trips on some routes will be reduced to match seasonal changes in ridership. Some trips on weekdays are being removed on these routes:

Some routes will continue to operate with reduced frequency due to lower ridership during the pandemic. Trips on weekdays are being adjusted on these routes:

To match seasonal changes in ridership levels, trips serving colleges and universities are being adjusted on these routes:

Due to the detour on Montréal Road, some routes serving high schools in Vanier are being adjusted:

The trip times on some routes will be adjusted to better match bell times. Further adjustments may occur based on the decisions of the Province and school boards relating to the COVID-19 pandemic. Trip times on school routes serving Longfields‑Davidson Heights Secondary School are being adjusted:

On Sunday April 18, Montréal Road will close in the eastbound direction from the Vanier Parkway to St-Laurent Boulevard for the Montréal Road Revitalization Project.

These routes will be detoured until Montréal Road reopens in 2022:

Rack & Roll is gearing up!

The Rack & Roll program returns again this spring, and it's expanding! By the end of April, all buses on our network will be equipped with a bike rack.

From May 22 until September 6, the westbound lane of the Sir John A. MacDonald Parkway will be closed to motor vehicles as part of the NCC Outdoor Wellness Project. Every Saturday, Sunday, and holiday Monday this summer, between 8 am and 4 pm, only cyclists will be able to access the westbound lane.

The following routes will be detoured during the weekend Bikedays events with minimal impacts to service:

Check the Alerts page on Saturday and Sunday mornings for more information about this detour.

Work on Ottawa roads continues into the spring and could lead to service delays and detours. Check the Alerts page for a full list of ongoing and planned detours.