Bus routes continue to be transformed into a coordinated network that simplifies connections with the O-Train.

Routes that have operated along the Transitway through central Ottawa will be replaced by high-frequency O-Train Confederation Line service. Currently, 48 different bus routes operate through downtown on Mackenzie King Bridge, Albert Street and Slater Street. All of these routes will be shortened to connect with the Confederation Line at Blair, Hurdman, or Tunney’s Pasture stations, and will not travel through downtown. Cross-regional routes will each be split into two new routes, one connecting to the train at a station in the west, and the other connecting at a station in the centre or east.

The O-Train Confederation Line is a 12.5-kilometre electric light-rail service that will connect 13 stations from Tunney’s Pasture in the west to Blair in the east, replacing current Transitway service through central Ottawa.

Limited service in the west end 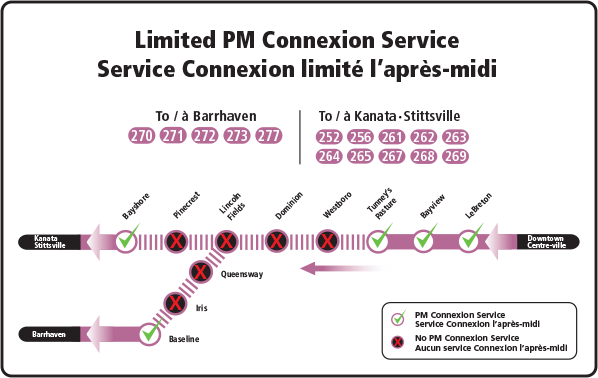 Local routes offer customized routing and schedules, to serve destinations that are not on a Rapid or Frequent route.

A symbol with a white background means that a Local route only runs during certain times of the day, or on certain days of the week

Local routes numbered below 100 will all connect to the O-Train Confederation Line!