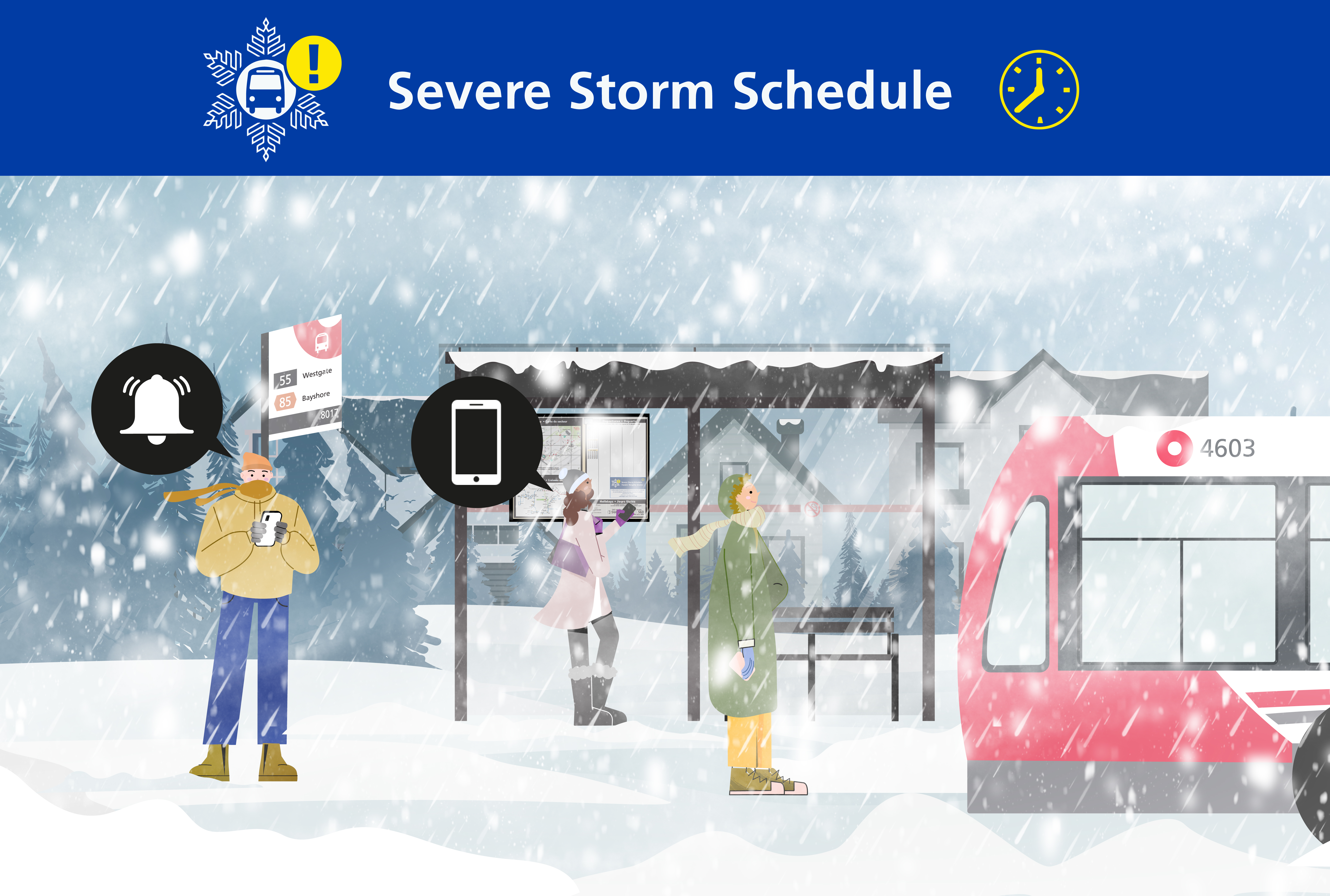 Providing safe and reliable transit service for customers is our top priority. We are taking steps this winter to better manage bus service during severe winter storms.

This winter, we are piloting a special Severe Storm Schedule for buses on weekdays. It will be in effect when 31 cm or more of snow is expected. Other severe weather conditions that could impact bus operation may also bring this special schedule in effect. This could include a mixture of wet, heavy snow, ice, and freezing rain.

As we introduce a Severe Storm Schedule pilot this winter, OC Transpo will gather data to measure its success. This will help to determine if the schedule should become permanent every winter.

My Alerts is the best and most reliable way to be in the know. Get notified instantly when the Severe Snow Schedule is in effect or when a detour may impact your normal trip. A text message would be sent directly to your cellphone or an email would be sent right to your inbox. Sign up for My Alerts today!

How will bus service change?

On weekdays, bus service will be based on a Saturday schedule, with limited service early mornings and on weekday-only routes. Trips will be added to select routes servicing hospitals.

O-Train Line 1 and Para Transpo service will not be reduced. However, customers should still expect delays.

Adjustments to bus types that are in operation will be made. This includes replacing many articulated buses with 40-foot or double-decker buses, as they tend to operate better in heavy snow.

If weather condition improves after being in effect or is less severe than expected, we will not continue with the Severe Storm Schedule. OC Transpo will work to restore regular service levels.

Bus routes that will operate normally

400-series and 450-series routes will operate for special events.

The following routes would operate on a normal weekday schedule:

Bus routes that will not operate

All 600-series School Routes and any school trips on regular routes would not operate.

The following routes and all Shopper Routes would not operate:

Bus routes that will operate on a modified schedule

The following routes would operate on a modified special schedule:

How will I know when it is in effect?

Customers will be notified a day in advance, through a variety of ways, each time a Severe Storm Schedule is in effect.

The best and most reliable way to be in the know is to sign up for My Alerts. That way you can get notified instantly when the Severe Snow Schedule is in effect. A text message would be sent directly to your cellphone or an email would be sent right to your inbox.

Some other ways that you can be notified are:

The OC Transpo app and other third party apps will not display the special schedule. Real-time travel tools 560560, 613-560-5000, Transit Information Screens at stations, and the Travel Planner, will reflect the Severe Storm Schedule in effect for that day. With those, you will be able to plan your trips reliably.

To get an idea of how your travel could be affected, use the Travel Planner.

Plan your trip during a Severe Storm Schedule